With its unique concept of Citizen Banking, WYBN and its perspective through the World Youth Bank as a global public financial institution, represent an all-inclusive development financing approach. This approach together with the introduction of new global market financial products and services are streamlined and adjusted to meet the needs of emerging nation states of the new millennium.

The President of the World Youth Bank, Mr. Mikhael Jamie Shamis Mizrahi, has set a standard of excellence for his clientele that each of his staff utilizes in preparing projects that are tailored and customized accordingly. Projects have been successfully realized in following this standard of excellence that efficiently matches resources, products and services from beginning to end. 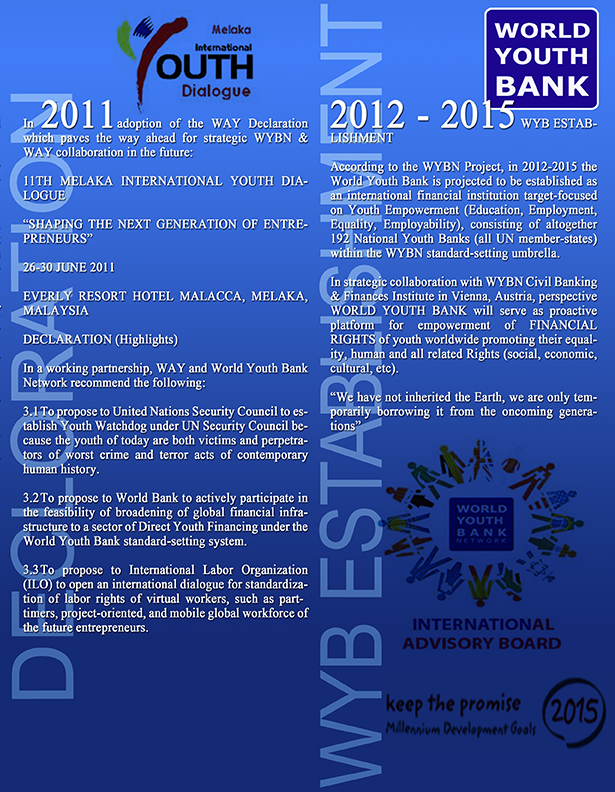 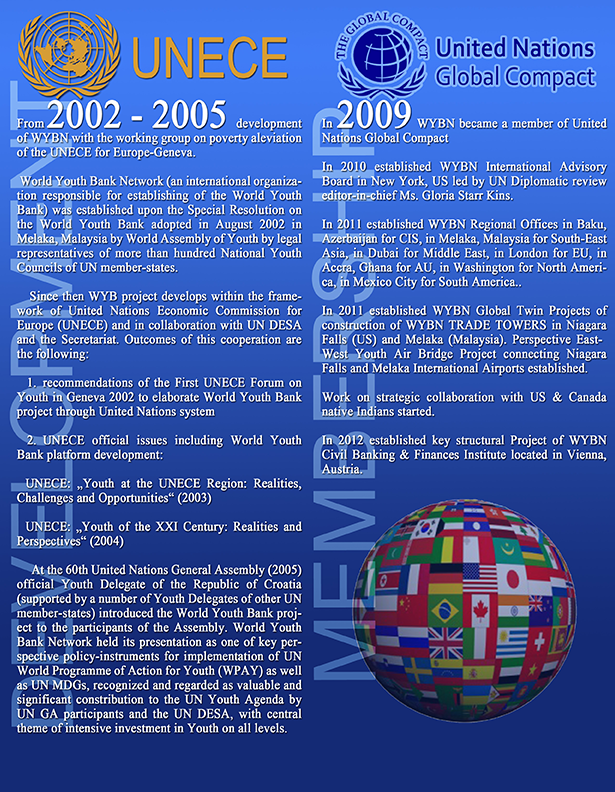 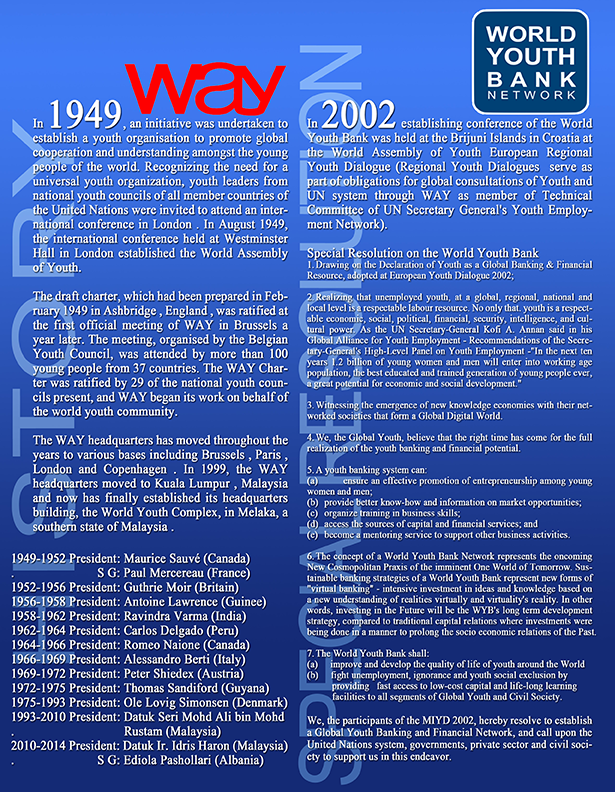 The global problem of sustainable Youth Employment opportunities is based on extremely slow or non-existent access to low-cost funds and investment capital.  This barrier and its resulting obstacles to development are due to various political and socio-economic factors.  Compounding this are the even more well-known facts and statistics that most Global funds (WB, EBRD, UN, WTO, ILO, etc) aimed at various Youth programs never really get to the local Youth; rather the funds funnel into national state budgets, never reaching or achieving their designated purpose.
Being radically assymetric and the non-transparent nature of the global financial network (traditionally the monetary system in general) as it is, remains evidently unable to solve the growing ‘Everest’ of Global Youth problems (unemployment, underemployment, social exclusion, etc).

World Youth Bank Network’s mission is to improve and develop a sustainable quality of life for Youth around the World; to fight unemployment, ignorance and youth social exclusion by providing sustainable secure access to low-cost capital and life-long learning facilities to all segments of Global Youth and Civil Society.

WE NEED TO BATTLE DARKNESS WITH LIGHT: 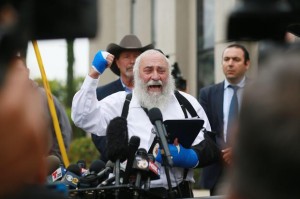 The rabbi who survived the deadly shooting at a synagogue near San Diego Saturday addressed members of the media and offered words of courage and inspiration. Speaking in front of Chabad of Poway Sunday afternoon, Rabbi Yisroel Goldstein said, “We need to battle darkness with light,” and thanked President Trump for calling him after the shooting.

“I see a sight that is indescribable,” the rabbi recalled of running into the gunman. “Here is a young man with a rifle, pointing right at me. And I look at him. He has sunglasses on. I couldn’t see his eyes. I couldn’t see his soul. I froze.” Goldstein, who lost a couple of fingers in the shooting, raised his bandaged hands to the cameras throughout his news conference.

Hundreds gathered at a park near the temple for a vigil honoring the victims Sunday night. They held candles and listened to prayers in Hebrew, The Associated Press reports. Poway Mayor Steve Vaus said he would stand with the community, and Goldstein said seeing the crowd come together provided consolation. “What happened to us, happened to all of us,” Goldstein said. 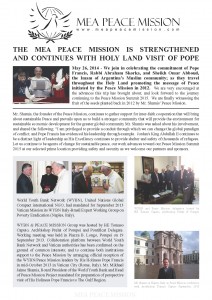 AMMAN, JORDAN, We join in celebrating the commitment of Pope Francis, Rabbi Abraham Skorka, and Sheikh Omar Abboud, the Imam of Argentina’s Muslim community; as they travel throughout the Holy Land promoting the message of Peace initiated by the Peace Mission in 2012. We are very encouraged at the advances this trip has brought about; and look forward to the journey continuing to the Peace Mission Summit 2015. We are finally witnessing the fruit of the seeds planted back in 2012 by Mr. Shamis’ Peace Mission.

VIENNA, VIRGINIA,  the parties will collaborate for the 19th  Congress on Information Technology (WCIT), Guadalajara, Mexico, September 29-October 1, 2014 on involving multi stakeholders, in particular the ICT industry, youth and the United Nations in activities that promote youth employment, closing the global skills gap and enhancing cooperation between the World Information Technology and Services Alliance  (WITSA) and the United Nations.

NEW YORK, NY - XIV InfoPoverty Conference on “How the Digital Innovations can accelerate the Achievement of Millennium Development Goals and help launch the Sustainable Development Goals” was held 10-11 April 2014 at the United Nations Headquarters in New York, under the High Patronage of the President of Italian Republic. This High-level conference was organized by UNDESA, European Parliament, European Commission, InfoPoverty Institute of the University of Oklahoma, OCCAM and Kins Group. Conference was broadcasted on-line worldwide. 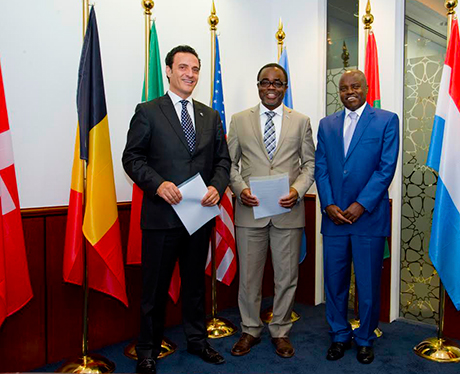 World Youth Bank Network President co-chaired the conference and made the Public Announcement of the new Secretary General of the organization – Mr. Mikhael Jaime Shamis Mizrahi. Mr. Shamis stepped into the position of new WYBN Secretary General from his previous post of Head of Task Force for GCC States of United Nations Convention to Combat Desertification. Experience and expertise of Mr. Shamis acquired during his previous dedicated activities within the valuable United Nations Convention as well as his professional standing in international world of finances and banking represents a significant structural advance for World Youth Bank Network.

With the entrance of new Secretary General Mr. Shamis and his global initiatives, WYBN has a new umbrella of offerings: the World Youth Bank Group, consisting of World Youth Bank Network as the Group’s non-for-profit wing; World Youth Bank as the Group’s banking and financial core; complimented by Global Immigrant Group and DiploFIN as private entities focused on empowerment of Youth Mobility worldwide and Education for Financial Diplomacy.

World Youth Bank Network President Mr. Bogdanic, with the strategic leadership of Mr. Shamis’ in providing the new structural changes, was able to announce key strategic projects on which WYBN will be focused in 2014-15:  further work on establishment of United Nations Security Council’s Youth Watchdog Agency. WYBN Regions in Focus for 2015-2020: Africa and Latin America.

Resulting from the high-level InfoPoverty conference held in New York WYBN announces perspective collaboration on selected development projects on agriculture and infrastructure development with Trust B&N and the African Union, on Youth Education special projects with Montessori and ETI of the University of Oklahoma including Hunter College NY, on IT with WITSA in Guadalajara, Mexico as start-up, with UNDESA on Youth Mobility and other issues, with European Commission and Parliament on Bridging the Digital Divide with highlight on active role of Youth for further implementation of EU Digital Agenda as well as giving assistance and support to the UN Secretary General’s Post-2015 Agenda.

At the request of the WYBG, WYBN will participate in the 2nd Arab Forum for Renewable...